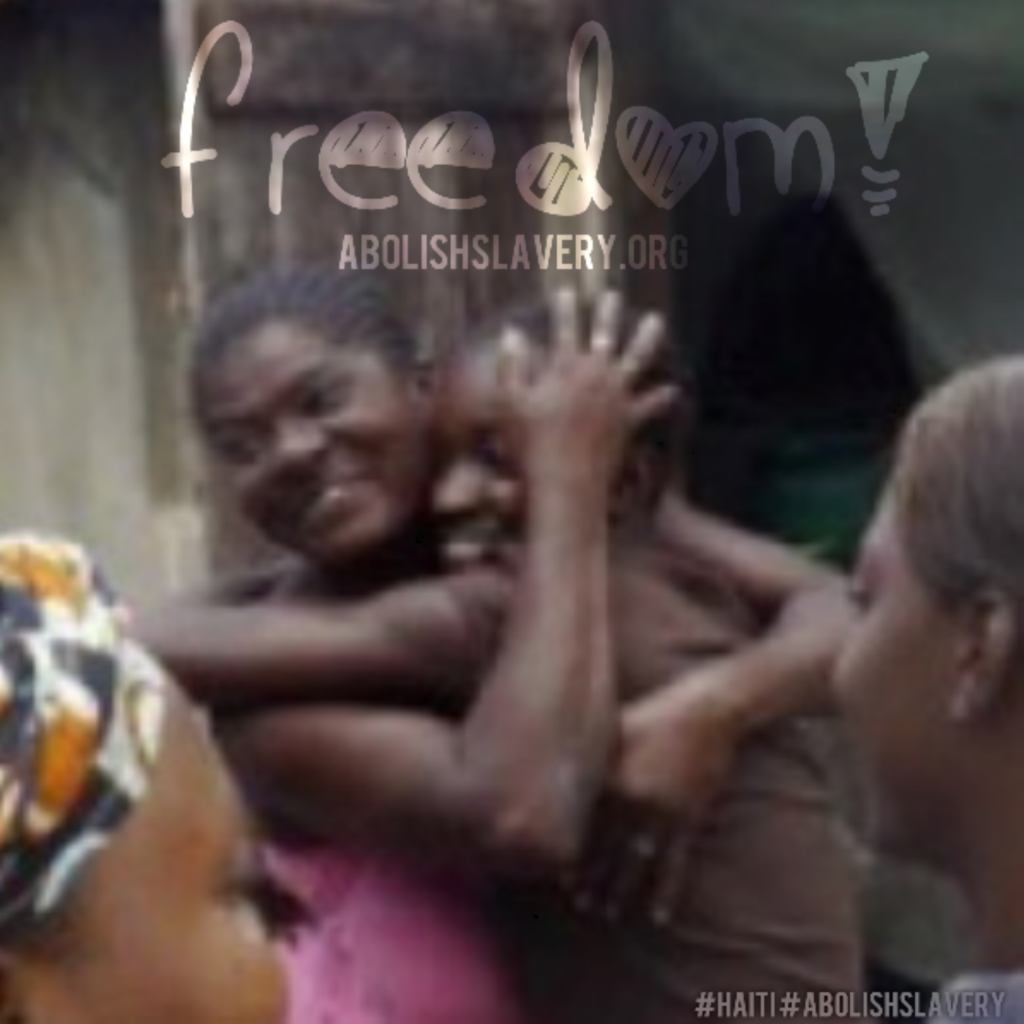 Abolish Slavery was in Haiti investigating traffickers and training the Haitian SWAT teams. There was a lot of pressure on us to provide the Haitian Human Trafficking Task Force with leads on victims. Our tactics were to investigate victim leads during night and train SWAT teams all day. Circumstances were ideal for success during this one-week operation.

Together on September 27, 2011 the armored cars were rented; Members of Abolish Slavery strapped on their helmets and prepared for the ride along with Haitian SWAT teams into the notorious Cite Soleil to look for child slaves and human traffickers that escaped from prison.

On September 29, 2011 the mission with SWAT in Haiti was intense! Abolish Slavery and the SWAT were armed with intelligence that our nightly investigations were able to provide about the traffickers, victims, and their locations as they busted many rapists and traffickers and then reunited “restavec” child slaves with their parents.

Erason, who lives in Haiti, worked with us reuniting former slaves with their families. At one moment Erason comforted a young girl being reunited with her mother, who had sold her. Erason (who went through the same thing) spoke to the girl of forgiveness. It was a very emotional moment.

Abolish Slavery was joyous. “It’s beautiful to reunite children with their parents after years in slavery. It was an honor for us to bring Annie back to her family. The young girl spent the last six years in slavery, so bringing her home felt so good. Really beautiful!”

Haiti is a source, transit, and destination country for men, women, and children subjected to forced labor and sex trafficking. Many of Haiti’s trafficking cases are the estimated 150,000-500,000 restaveks – the term for children in forced domestic service. The majority of children that become restaveks do so when recruiters arrange for them to live with families in other cities and towns in the hope of going to school. Restaveks are treated differently from other non-biological children living in households; in addition to involuntary servitude, these children are particularly vulnerable to beatings, sexual assaults, and other abuses by family members in the homes in which they are residing. Dismissed and runaway children, many of whom were former restaveks, as well as many restaveks displaced by the 2010 earthquake, make up a significant proportion of the large population of street children who end up forced into prostitution, begging, or street crime by violent criminal gangs in Haiti. There were some incidents of foreigners procuring child commercial sex acts, including at least two incidents of sexual exploitation and abuse reported by the UN Stabilization Mission in Haiti (MINUSTAH). There have been documented cases of Dominican women in forced prostitution in Haiti.

NGOs monitoring the Haitian-Dominican border reported that children frequently cross the border illegally, often in the company of an adult who is paid to pretend to be the child’s parent or guardian until they get to the other side. Some of these children are reunited with parents working in the Dominican Republic, but others are believed to be forced into organized begging rings or in domestic servitude. Authorities have also reported regularly seeing trucks full of children heading for the border, as well as “mobile brothel” trucks containing people in prostitution, driving from town to town and across the Haitian-Dominican Republic border.

Haitian men, women, and children also are subjected to forced labor and sex trafficking in the Dominican Republic, other Caribbean countries, the United States, and South America. The groups most at risk to trafficking were those from the lowest income backgrounds, especially undocumented Haitians. One Haitian government report estimated that the births of more than 10 percent of Haitians were not registered.

The Government of Haiti does not fully comply with the minimum standards for the elimination of trafficking; however, it is making significant efforts to do so. Despite these efforts, the government failed to demonstrate evidence of increasing efforts to address human trafficking over the previous reporting period; therefore, Haiti is placed on Tier 2 Watch List. The absence of strong legislation criminalizing all forms of human trafficking and related policies or laws on victim protection severely limited the government’s ability to prosecute trafficking offenders and protect victims. Still recovering from the 2010 earthquake, coordination of anti-trafficking activities remained a challenge and support for victims was almost exclusively donor funded because of the lack of capacity in existing and weak government institutions. However, government officials worked with NGOs to rescue child trafficking victims.

Recommendations for Haiti: Enact legislation prohibiting sex trafficking and all forms of forced labor, including domestic servitude, with penalties that are proportionate to other serious crimes such as rape; investigate, prosecute and convict trafficking offenders, including persons abusing restaveks or prostituting children under 18, using available legal instruments; adopt laws or policies to guarantee victims are not punished for crimes committed as a direct result of being trafficked; in partnership with NGOs, adopt and employ formal procedures to guide officials in proactive victim identification and referral of child and adult victims to appropriate shelters and services; raise awareness through high-level public statements to inform the public about the causes and consequences of forced labor and forced prostitution; and establish an inter-ministerial task force to plan and coordinate the government’s anti-trafficking efforts.

Efforts to prevent new incidents of human trafficking in Haiti were largely driven by international organizations and NGOs. There were no reports of government funded anti-trafficking information campaigns conducted or hotlines established during the reporting period. The government did not have a national plan of action to address trafficking in persons in a strategic way; officials expressed the desire to put together such a plan. No single agency or official had the lead in anti-trafficking efforts, and there was no inter-ministerial group to coordinate the government’s response to forced labor and sex trafficking. In an action that helped to prevent abuse of children and child trafficking, the newly installed head of IBESR closed several unregulated children care centers. There were no known measures by the government taken during the reporting period to reduce the demand for commercial sex acts.